Live Q&A with Creator/Showrunner/Executive Producer, “Vida” Tanya Saracho
2020-10-29 23:25:00
2020-10-29 23:30:00
https://network.nyfa.edu//medias/image/thumbnail_16802056805f90992e92212.jpg
US
Live Online Q&amp;A WithCreator, Showrunner, and Executive ProducerTanya SarachoThursday, October 29, 20203:00 p.m. ET/ 12:00 p.m. PTJoin NYFA&#39;s Diversity, Equity &amp; Inclusion Council for a conversation about television writing and producing in a live Q&amp;A with creator, showrunner, and executive producer Tanya Saracho.&nbsp;We will discuss her transition from playwriting to screenwriting, running and staffing a writers room, the importance of authenticity in storytelling and the art of writing diverse Latinx characters, and stories and worlds from an intersectional perspective. The discussion will be moderated by NYFA Screenwriting instructor Dafina RobertsTo attend, click the register button below.Tanya Saracho is a playwright and television writer who serves as creator, showrunner, and executive producer of the critically-acclaimed series Vida on Starz, which earned 100% critical rating on Rotten Tomatoes for its first, second and third seasons. The show, which recently aired its third and final season on Starz, featured all Latinx directors in season one, and all Latina directors in seasons two and three, including Saracho, who made her television directorial debut last year. The series had an all-Latinx writers room for seasons one and two, and in season three, the room was composed of all Latina writers.Named one of &ldquo;TV Scribes to Watch&rdquo; by Variety in 2018, Saracho was recently honored by the LGBTQ California Legislative Caucus as their 2020 Pride Month Honoree. She received the Rising Star Award at the Outfest Legacy Awards, and was awarded the New Voice Award by Final Draft. Vida won the GLAAD Media Award for Outstanding Comedy Series and was nominated for a second year in a row for season two, and was also honored by the National Hispanic Media Coalition with the 2019 Impact Award. The series won the Audience Award at the 2018 SXSW Film Festival, and made its season two premiere as an Official Selection of the 2019 Tribeca Film Festival.Saracho recently signed an overall deal with Universal Content Productions (UCP), and as part of the deal, she will establish a lab and incubator program aimed to nurture, amplify, guide, and empower intersectional Latinx voices. Her television credits include How to Get Away with Murder, HBO&#39;s Looking, and Devious Maids.Saracho was named &ldquo;Best New Playwright&quot; by Chicago Magazine, and has had plays produced at New York City&rsquo;s Primary Stages and 2nd Stage, as well as Victory Gardens Theatre, The Denver Theatre Center, Oregon Shakespeare Festival, The Goodman Theater, Steppenwolf Theater, Teatro Vista, Teatro Luna, Fountain Theater, Clubbed Thumb, NEXT Theater and 16th Street Theater.Saracho was also named one of nine national Latino &quot;Luminarios&quot; by Caf&eacute; Magazine, and received the first &quot;Revolucionario&rdquo; Award in Theater by the National Museum of Mexican Art. She is the founder of Teatro Luna (the first all-Latina Theatre Company in the nation, now defunct) as well as the founder of ALTA (Alliance of Latino Theatre Artists). She is currently in development with South Coast Repertory and Two River Theatre.Dafina Roberts is a NYFA Screenwriting Instructor and a member of the academy&#39;s Diversity, Equity &amp; Inclusion Council (DEI Council). She is also a writer/director/producer with television development experience, specializing in intersectional storytelling that explores themes of race, gender, sexuality and class.Recently, Roberts was a 2019 Ryan Murphy Half Initiative Directing Fellow. Previously, she created the digital series Giving Me Life (In The Land Of The Deadass), which followed six Black and Latinx friends of diverse sexualities struggling to find love in New York City. The series was released in 2019 via Comcast&rsquo;s Xfinity, UrbanOne, Gravitas Ventures and RevryTV. Previously, the series won the AT&amp;T Audience Award for Best Episodic at the 2018 Frameline San Francisco International LGBT Film Festival. It was also an Official Selection of the 2017 New York Television Festival, 2018 Cleveland International Film Festival, and 2018 Atlanta Out On Film Festival. In 2017, Roberts was a Kickstarter Creator-In-Residence while she was in production on Giving Me Life.Prior to that, she worked as a Director of Development &amp; Production at Nickelodeon, where she oversaw development and current series for scripted and unscripted projects; helped manage the first-look deal with Nick Cannon&rsquo;s Ncredible Entertainment; and coordinated the network&rsquo;s current series slate with past credits including the Emmy-nominated Degrassi and the channel&rsquo;s first English-speaking telenovela Every Witch Way, to name a few.She also co-produced the urban coming-of-age feature film, Punching At The Sun (Official Selection of the 2006 Sundance Film Festival and Tribeca Film Festival; Winner for Best Narrative at the San Francisco International Asian American Film Festival).
https://network.nyfa.edu/event/live-q-a-with-creator-showrunner-executive-producer-vida-tanya-saracho/2020/10/29/408
Thursday, 29 October 2020
23:25 - 23:30
Add to my calendar
Online 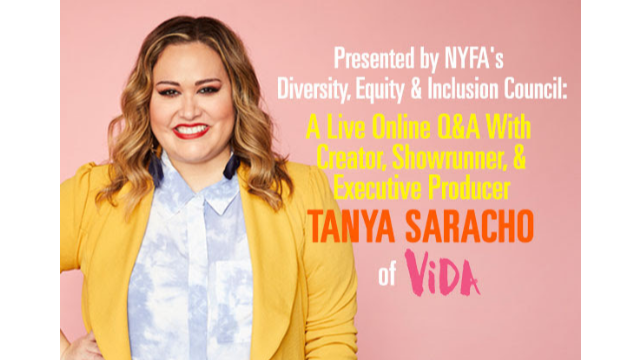