Live Q&A with Director of THE DEVIL ALL THE TIME - Antonio Campos: Register Now

Live Q&A with Director of THE DEVIL ALL THE TIME - Antonio Campos: Register Now
2020-09-29 20:00:00
2020-09-29 20:05:00
https://network.nyfa.edu//medias/image/thumbnail_16130786045f6cd37c94aa2.jpg
US
Join NYFA’s live Q&amp;A with director and NYFA Filmmaking alum Antonio Campos on his new Netflix hit movie, THE DEVIL ALL THE TIME.To attend the live Q&amp;A with Director &amp; NYFA Alum Antonio Campos, click the register button below.Antonio Campos&nbsp;is a NYFA filmmaking alum, an acclaimed writer, producer and director, who most recently co-wrote and directed the just released&nbsp;THE DEVIL ALL THE TIME - a huge hit thus far with critics and fans alike that has continued to dominate&nbsp;Netflix, consistently ranking in the top ten most-watched items on the streaming service. The film boasts a star-studded cast of Tom Holland, Robert Pattinson, Riley Keough, Bill Skarsgård, Jason Clarke, Sebastian Stan, and more.Campos' other notable feature credits as a director include the Sundance sensations&nbsp;CHRISTINE&nbsp;starring Rebecca Hall and&nbsp;SIMON KILLER starring Brady Corbet. His debut feature&nbsp;AFTERSCHOOL premiered at the Cannes Film Festival and was nominated for the Caméra d'Or and Un Certain Regard awards. In TV, Campos directed the pilot of USA’s Emmy-nominated series&nbsp;THE SINNER and served as an Executive Producer for the first season of the anthology series. He is now writing a TV series for&nbsp;Harrison Ford.THE DEVIL ALL THE TIME is a controversial movie that tells the story of a young man devoted to protecting those he loves in a postwar backwoods town teeming with corruption and brutality.To watch the film ahead of the Q&amp;A, stream the film on Netflix&nbsp;here. Don’t have an account? Try 30 days of free Netflix by&nbsp;clicking here.
https://network.nyfa.edu/event/live-q-a-with-director-of-the-devil-all-the-time-antonio-campos-register-now/2020/09/29/393
Tuesday, 29 September 2020
20:00 - 20:05
Add to my calendar
Online 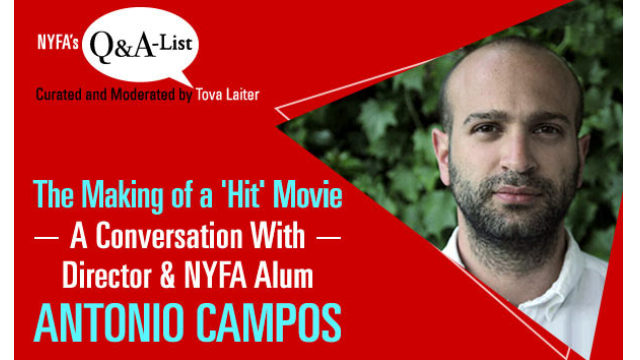