Online 20/20 Series with Award-Winning Directors Nicole Kassell & Sarah Pirozek - Register Now
2020-08-26 00:55:00
2020-08-26 01:00:00
https://network.nyfa.edu//medias/image/thumbnail_16753090635f443fc5a1702.jpg
US
You've been invited toTHE 20/20&nbsp;SERIESCreated by Liz HinleinA Conversation withAward-Winning DirectorsNicole Kassell &amp; Sarah PirozekWednesday, August 26, 20203:00 p.m. ET/12:00 p.m. PTPresented byNew York Film AcademyThe 20/20&nbsp;Series is a pop-up event that takes us into the homes, hubs and workspaces of an array of dynamic creative visionaries to allow for relaxed, engaging conversations on craft, creation and artistic vision.Each conversation with a creative visionary features&nbsp;20 minutes of discussion with a moderator and a&nbsp;20 minute Q&amp;A from&nbsp;YOU, the audience.This event is open to the public, as a means of promoting&nbsp;global connection and&nbsp;creativity, a key mission of NYFA.Missed a conversation?Check out our 20/20&nbsp;Series video library&nbsp;here.Nicole Kassell is a DGA Award-winning and Emmy-nominated filmmaker and has directed following multiple episodes of critically praised series, including&nbsp;Westworld, Watchmen, The Leftovers, The Killing, The Americans, The Following, and&nbsp;Rectify . Kassell most recently executive produced the HBO limited series&nbsp;Watchmen starring Emmy and Academy Award winners Regina King, Jeremy Irons, and Louis Gossett Jr. Kassell, who won a DGA Award this year for her work on the&nbsp;Watchmen pilot, also directed episodes two and eight of the series. Kassell is set to direct the upcoming feature film&nbsp;Silver Seas, and she is attached to direct and executive produce&nbsp;The Last of the Mohicans series for HBO Max.Kassell’s first feature film&nbsp;The Woodsman, which she co-wrote with Steven Fechter, premiered in competition at the Sundance Film Festival and was distributed by Newmarket Films. The film also received a CACAE (Art House award) at the Directors’ Fortnight at The Cannes Film Festival; The Jury Prize at the Deauville Film Festival; a Humanitas nomination; and The Satyajit Ray Award at the London Film Festival. For her work on the film, Kassell was nominated for a Gotham Award (Breakthrough Director) and Independent Spirit Award (Best First Feature) and was recognized by Variety as one of ten “Directors to Watch.”Sarah Pirozek (Writer/Director/Producer): As a teen Pirozek taught art to Bengali refugee kids, was a chairperson of the newly founded ‘Brixton Housing Co-op’, played with her punk band, and was introduced to the music industry by Puffy and Andre Harrell at Uptown Records, all before working in film.After studying in London, she moved to NYC working two jobs while studying at the ‘Whitney’s ISP’, ‘The Actors Studio’ and ‘The New School.’ She began working in the film industry directing music videos, segments, and commercials, shocked to find how much bias and BS faced women she decided to do what she could to change the narrative, working to reinforce positive female role models on screen and cast diverse faces in as many projects as possible.She has helmed over 100 award commercials, multiple music videos, produced three features; including her award-winning documentary feature films&nbsp;Free Tibet and as a producer the indie feature&nbsp;Flora, has written two features, a series and collection of short stories, going on to direct, produce and write TV programming &amp; web content for the Sundance Channel, NAT GEO, PBS, HBO and The UK’s Channel Four TV. She is a DGA member in good standing, and has recently made her dramatic feature debut with her script&nbsp;#LIKE, currently on the festival, circuit garnering fantastic reviews.Her awards include a "Best of Fest" from The Edinburgh IFF, Showtime’s New-Talent "No Limits Award" "BDA Silver," multiple "Art Direction" "Awards of Distinction”, “NY Film and Television Awards”, which include Gold, Silver and Finalist awards, a "Monitor" Award, an "Addy," and a "British Arts Council Award."&nbsp;#LIKE has won “Best Script” and “Best Producer” awards, and was selected for The DGA’s “Directors Finders Series."Her scripts have been nominated in screenplay competitions such as ‘ISA’, ‘ScreenCraft’, ‘Stowe’, ‘Slamdance’ and ‘The PAGE Awards’. She has worked with talent as disparate as Tribe Called Quest, Bjork, Denis O’Hare, Sade, Roman Coppola, Shaquille O'Neal, Speech, the White Stripes, Aimee Mann, Lance Accord, Queen Latifah, Spike Jonze, Bokeem Woodbine and Billy Crudup among others. But before all this she was a kid who survived and thrived living off-grid as a teen squatter.Liz Hinlein is an award-winning director and cinematographer. She is the creator of&nbsp;The 20/20 Series and is the Creative Director of Filmmaking &amp; Cinematography and New York Film Academy. Over the course of her career, Hinlein has made a name for herself in a traditionally male-dominated industry as a passionate, talented filmmaker and director of photography whose work has spanned the fields of feature film, advertising, music video and VR/AR/XR.Hinlein’s debut feature film,&nbsp;Other People’s Children, earned several awards on the film festival circuit—including Best of the Fest at the Columbia Gorge International Film Festival and Best Director at the NYLA International Film Festival—and is currently available to stream on Amazon Prime and iTunes. Recently, her&nbsp;VR film for Byton Auto was nominated for Best Branded Entertainment/Commercial at the 2019 CES VR Fest and in 2018, she directed Accenture’s VR film,&nbsp;Behind the Style, winning that same award.Most recently, Hinlein spent time in China writing and directing&nbsp;The Dream Factory and she is currently in&nbsp;OSAGE '85, a groundbreaking immersive documentary experience. Her visual expertise comes from a background of directing commercials and music videos for top brands, including Dove, Lifetime, Revlon, Gillette, Maybelline, A&amp;E, and MAC Cosmetics. Additionally, Hinlein has created films for superstar musicians such as Mary J. Blige and Britney Spears, and has been commissioned to photograph Quincy Jones, Incubus, and Fishbone.
https://network.nyfa.edu/event/online-20-20-series-with-award-winning-directors-nicole-kassell-sarah-pirozek-register-now/2020/08/26/374
Wednesday, 26 August 2020
00:55 - 01:00
Add to my calendar
Online 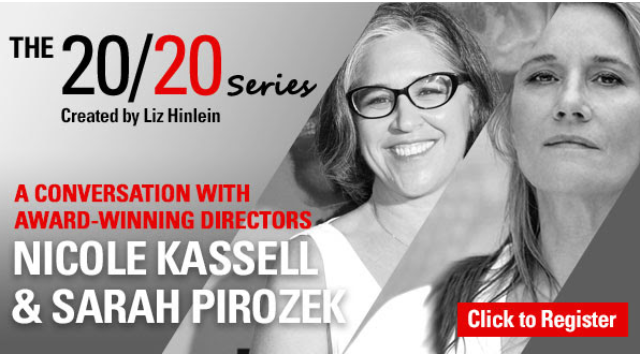