Online 20/20 Series with Cinematographer Anthony B. Richmond - Register Now
2021-01-06 23:00:00
2021-01-06 23:05:00
https://network.nyfa.edu//medias/image/thumbnail_19714899735ff38d3c29494.jpg
US
You've been invited toTHE 20/20&nbsp;SERIESCreated by Liz HinleinA Conversation withCinematographer &amp; BAFTA-WinnerAnthony B. RichmondWednesday, January 6, 20213:00 p.m. ET/12:00 p.m. PTPresented byNew York Film AcademyThe 20/20&nbsp;Series is a pop-up event that takes us into the homes, hubs and workspaces of an array of dynamic creative visionaries to allow for relaxed, engaging conversations on craft, creation and artistic vision.Each conversation with a creative visionary features 20 minutes of discussion with a moderator and a 20 minute Q&amp;A from YOU, the audience.This event is open to the public, as a means of promoting global connection and creativity, a key mission of NYFA.Missed a conversation?Check out our 20/20 Series video library here.Anthony B. Richmond&nbsp;(A.S.C. and B.S.C) is an accomplished Cinematographer, whose career spans well over six decades. His most recent credits include&nbsp;Good Luck Chuck; The Comebacks; Shade; Havana Nights; Legally Blond; Ravenous; Men Of Honor; The Sweetest Thing; Someone Like You; Just Friends; John Tucker Must Die; Autopsy; Sex and Lies in Sin City; The Rocker; Alvin the Squeakquel; Coffee Town; The Assets for Peter Medak. He has also worked on&nbsp;Diary of a Wimpy Kid: Dog Days and&nbsp;The Long Haul, both for David Bowers.Born and raised in London, Richmond worked his way up to become a Director of Photography. He has worked as an Assistant Cameraman on projects such as&nbsp;Call Me Bwana; From Russia with Love; Devil-Ship Pirates; The Gorgan; A Funny Thing Happened On The Way To The Forum; Truffaut’s Fahrenheit 451 and David Leans’s&nbsp;Dr. Zhivago.Richmond served as focus-puller on&nbsp;Casino Royale and on&nbsp;Far From the Madding Crowd for Director John Schlesinger. An award-winning Cinematographer, Richmond has had numerous collaborations with Director Nicolas Roeg, lensing five of his films:&nbsp;Don’t Look Now - for which Richmond won the prestigious BAFTA award;&nbsp;The Man Who Fell To Earth; Bad Timing; Heart Of Darkness; and&nbsp;Full Body Massage for Showtime. Some of Richmond’s other credits include&nbsp;The Sandlot; Candyman; Stardust for Michael Apted;&nbsp;Playing God; Dirty Dancing: Havana Nights; Rough Riders for John Milius;&nbsp;Silver Bears for Ivan Passer,&nbsp;That’s Life and&nbsp;Sunset for Blake Edwards;&nbsp;The Eagle Has Landed&nbsp;for John Sturges; and&nbsp;The Greek Tycoon for J. Lee Thompson and Alan Kline. Richmond was also responsible for the photography of the seminal British music scene of the late ’60s.&nbsp;He shot the Rolling Stones classic, “Sympathy For The Devil” for Jean-Luc Godard, with which he then collaborated with Michael Lindsey Hogg on The Rolling Stones’ “Rock And Roll Circus” and the Beatles “Let It Be.” His other rock and roll credits include the Who’s “The Kids Are Alright,” as well as the Documentary&nbsp;Glastonbury Fayre.For the last two years between films, he has served as the Chair of the Cinematography Department at New York Film Academy. Richmond is a member of the Academy Motion Picture Arts &amp; Sciences (A.M.P.A.S), British Academy of Film &amp; Television Arts (B.A.F.T.A), American Society of Cinematographers (A.S.C), and British Society of Cinematographers (B.S.C).Liz Hinlein is an award-winning director and cinematographer. She is the creator of&nbsp;The 20/20 Series and is the Creative Director of Filmmaking &amp; Cinematography at New York Film Academy. Over the course of her career, Hinlein has made a name for herself in a traditionally male-dominated industry as a passionate, talented filmmaker and director of photography whose work has spanned the fields of feature film, advertising, music video and VR/AR/XR.Hinlein’s debut feature film,&nbsp;Other People’s Children, earned several awards on the film festival circuit—including Best of the Fest at the Columbia Gorge International Film Festival and Best Director at the NYLA International Film Festival—and is currently available to stream on Amazon Prime and iTunes. Recently, her&nbsp;VR film for Byton Auto was nominated for Best Branded Entertainment/Commercial at the 2019 CES VR Fest and in 2018, she directed Accenture’s VR film,&nbsp;Behind the Style, winning that same award.Most recently, Hinlein spent time in China writing and directing&nbsp;The Dream Factory and she is currently in pre-production on&nbsp;OSAGE '85, a groundbreaking immersive documentary experience. Her visual expertise comes from a background of directing commercials and music videos for top brands, including Dove, Lifetime, Revlon, Gillette, Maybelline, A&amp;E, and MAC Cosmetics. Additionally, Hinlein has created films for superstar musicians such as Mary J. Blige and Britney Spears, and has been commissioned to photograph Quincy Jones, Incubus, and Fishbone.
https://network.nyfa.edu/event/online-20-20-series-with-cinematographer-anthony-b-richmond-register-now/2021/01/06/435
Wednesday, 06 January 2021
23:00 - 23:05
Add to my calendar
Online 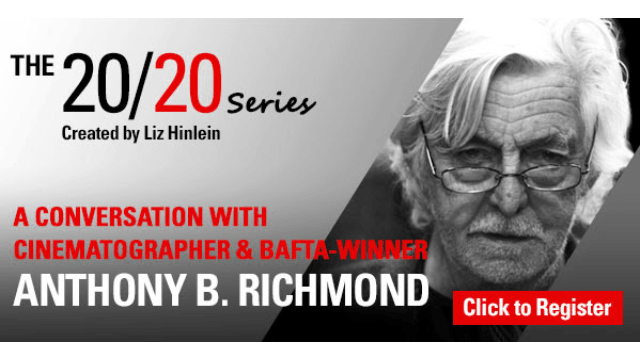