THE 20/20 SERIES: A Conversation with Cinematographer Anka Malatynska

THE 20/20 SERIES: A Conversation with Cinematographer Anka Malatynska
2020-05-18 23:50:00
2020-05-20 23:55:00
https://network.nyfa.edu//medias/image/thumbnail_18282834305ec2f535bb433.jpg
Online
US
THE 20/20&nbsp;SERIESCreated by Liz HinleinA Conversation withCinematographer Anka MalatynskaWednesday, May 20, 20203:00 p.m. ET/12:00 p.m. PTPresented byNew York Film AcademyThe 20/20&nbsp;Series is a pop-up event that takes us into the homes, hubs and workspaces of an array of dynamic creative visionaries to allow for relaxed, engaging conversations on craft, creation and artistic vision.Each conversation with a creative visionary features&nbsp;20 minutes of discussion with a moderator and a&nbsp;20 minute Q&amp;A from&nbsp;YOU, the audience.This event is open to the public, as a means of promoting&nbsp;global connection and&nbsp;creativity, a key mission of NYFA.Anka Malatynska&nbsp;was named as one of the “10 Rising Stars of Cinematography 2019” in American Cinematographer Magazine. She is currently wrapping production on the highly anticipated new Hulu/Annapurna anthology series&nbsp;Monsterland, while her most recent feature film&nbsp;Breaking Fast, recently premiered at Cinequest in San Jose and Outfest Fusion in Los Angeles. As a European immigrant with a passion for life and sensitivity to humanity that is evident in the exquisite and often breathtaking images in her work, Anka is one of the most fascinating cinematographers to watch in 2020.Anka has continually sought out and created work that is bold and diverse. She has fraternized with dignitaries and diplomats, hung out with East L.A. gangsters, and speaks three languages fluently (and is comfortably conversational in half a dozen more). The daughter of a Himalayan mountain climber and Polish immigrant scientist mother, Anka is deeply passionate about living an inspired life. Outside of filmmaking, Anka herself is a mother, a wife, a surfer, a yogi, a traveler and purposefully inspiring human being. Anka lives in New York and Los Angeles, but when she is not on set she spends the majority of the time traveling with her husband and son.Liz Hinlein is an award-winning director and cinematographer. She is the creator of&nbsp;The 20/20 Series and is the Creative Director of Filmmaking &amp; Cinematography and New York Film Academy. Over the course of her career, Hinlein has made a name for herself in a traditionally male-dominated industry as a passionate, talented filmmaker and director of photography whose work has spanned the fields of feature film, advertising, music video and VR/AR/XR.Hinlein’s debut feature film,&nbsp;Other People’s Children, earned several awards on the film festival circuit—including Best of the Fest at the Columbia Gorge International Film Festival and Best Director at the NYLA International Film Festival—and is currently available to stream on Amazon Prime and iTunes. Recently, her&nbsp;VR film for Byton Auto was nominated for Best Branded Entertainment/Commercial at the 2019 CES VR Fest and in 2018, she directed Accenture’s VR film,&nbsp;Behind the Style, winning that same award.Most recently, Hinlein spent time in China writing and directing&nbsp;The Dream Factory and she is currently in&nbsp;pre-production on&nbsp;OSAGE '85, a groundbreaking immersive documentary experience. Her visual expertise comes from a background of directing commercials and music videos for top brands, including Dove, Lifetime, Revlon, Gillette, Maybelline, A&amp;E, and MAC Cosmetics. Additionally, Hinlein has created films for superstar musicians such as Mary J. Blige and Britney Spears, and has been commissioned to photograph Quincy Jones, Incubus, and Fishbone.
https://network.nyfa.edu/event/the-20-20-series-a-conversation-with-cinematographer-anka-malatynska/2020/05/18/330
Monday, 18 May 2020
Wednesday, 20 May 2020 23:55
Add to my calendar
Online 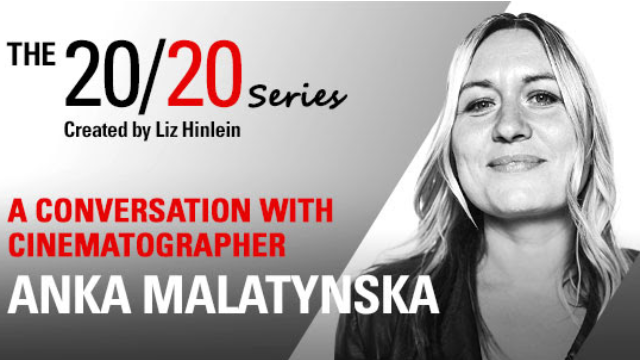