The Online 20/20 Series with Award-Winning Director Sarah Pirozek
2020-12-02 22:05:00
2020-12-02 22:10:00
https://network.nyfa.edu//medias/image/thumbnail_4802512845fc55085c57fb.jpg
US
You've been invited toTHE 20/20&nbsp;SERIESCreated by Liz HinleinA Conversation with Award-Winning DirectorSarah PirozekWednesday, December 2, 20203:00 p.m. ET/12:00 p.m. PTPresented byNew York Film AcademyThe 20/20&nbsp;Series is a pop-up event that takes us into the homes, hubs and workspaces of an array of dynamic creative visionaries to allow for relaxed, engaging conversations on craft, creation and artistic vision.Each conversation with a creative visionary features 20 minutes of discussion with a moderator and a 20 minute Q&amp;A from YOU, the audience.This event is open to the public, as a means of promoting global connection and creativity, a key mission of NYFA.Missed a conversation?Check out our 20/20 Series video library here.Sarah Pirozek is an award-winning Writer/Director/Producer with a fine arts and documentary background. She relocated from London to NYC where she attended the Whitney Museum's "Independent Study Program" and the renowned Actors Studio. Her original feature,&nbsp;#LIKE, is currently earning accolades and winning "Best Script,” “Best Director,” and “Best Actor” awards at multiple film festivals. Pirozek's autobiographical original script,&nbsp;The Squatters Handbook, is in development, as well as her 1/2 hour TV pilot, Rockaway, and the documentary&nbsp;The Coffee and Cream Club. Her short,&nbsp;Confessions of a Girl Who Never Received a Visitation From The Sacred Heart screened at the London International Film Festival. She has directed shorts, music videos, and over 100 commercials, as well as programming for The Sundance Channel, MTV, VH1, PBS, HBO, NAT GEO, AMC, BBC, and Channel Four TV in London. She also co-created the TV show,&nbsp;Crafty, for the Discovery Channel.Her other projects include the feature&nbsp;Free Tibet, featuring the Foo Fighters, Bjork, De La Soul, among many others, which was picked up after winning the "Best of Fest” award at The Edinburgh International Film Festival, and as a producer, the indie feature&nbsp;Flora, premiering at LA's Outfest, winning Showtime's "New Talent Award,” distributed by Regent Entertainment.&nbsp;#LIKE is slated for release in early 2021. She is a DGA member in good standing and her Wu-Tang name is Midnight Prophet.To follow Pirozek and her projects:FB: @hashtagLIKEthefeaturefilm &amp; @Sarah PirozekIG: @like_thefeaturefilm &amp; @pixiehaleClick here for the trailer for&nbsp;#LIKELiz Hinlein is an award-winning director and cinematographer. She is the creator of&nbsp;The 20/20 Series and is the Creative Director of Filmmaking &amp; Cinematography at New York Film Academy. Over the course of her career, Hinlein has made a name for herself in a traditionally male-dominated industry as a passionate, talented filmmaker and director of photography whose work has spanned the fields of feature film, advertising, music video and VR/AR/XR.Hinlein’s debut feature film,&nbsp;Other People’s Children, earned several awards on the film festival circuit—including Best of the Fest at the Columbia Gorge International Film Festival and Best Director at the NYLA International Film Festival—and is currently available to stream on Amazon Prime and iTunes. Recently, her&nbsp;VR film for Byton Auto was nominated for Best Branded Entertainment/Commercial at the 2019 CES VR Fest and in 2018, she directed Accenture’s VR film,&nbsp;Behind the Style, winning that same award.Most recently, Hinlein spent time in China writing and directing&nbsp;The Dream Factory and she is currently in pre-production on&nbsp;OSAGE '85, a groundbreaking immersive documentary experience. Her visual expertise comes from a background of directing commercials and music videos for top brands, including Dove, Lifetime, Revlon, Gillette, Maybelline, A&amp;E, and MAC Cosmetics. Additionally, Hinlein has created films for superstar musicians such as Mary J. Blige and Britney Spears, and has been commissioned to photograph Quincy Jones, Incubus, and Fishbone.
https://network.nyfa.edu/event/the-online-20-20-series-with-award-winning-director-sarah-pirozek/2020/12/02/428
Wednesday, 02 December 2020
22:05 - 22:10
Add to my calendar
Online 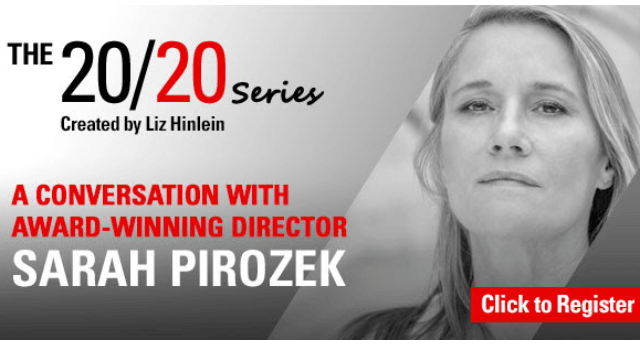