The Online 20/20 Series with Content Entrepreneur Joanna Bowzer - Register Now
2020-10-28 19:00:00
2020-10-28 19:05:00
https://network.nyfa.edu//medias/image/thumbnail_722260395f970e3f57069.jpg
US
You've been invited toTHE 20/20&nbsp;SERIESCreated by Liz HinleinA Conversation with Content EntrepreneurJoanna BowzerWednesday, October 28, 20203:00 p.m. ET/12:00 p.m. PTPresented byNew York Film AcademyThe 20/20&nbsp;Series is a pop-up event that takes us into the homes, hubs and workspaces of an array of dynamic creative visionaries to allow for relaxed, engaging conversations on craft, creation and artistic vision.Each conversation with a creative visionary features 20 minutes of discussion with a moderator and a 20 minute Q&amp;A from YOU, the audience.This event is open to the public, as a means of promoting global connection and creativity, a key mission of NYFA.Missed a conversation?Check out our 20/20 Series video library here.Joanna Bowzer is a Los Angeles-based content entrepreneur with creative projects in film, theater and immersive storytelling. She has over 15 years of experience working in start-ups focused on digital media and premium online content and education. She continues to work with new companies, content entrepreneurs, and performing artists, helping them build branding, business development, career and marketing strategies.As writer and director, Bowzer’s work has been called both “bold, inspiring and a breath of fresh air” and “casually sardonic” by the New York Theater Review and LA Weekly, respectively. Her films have won awards at over a dozen festivals, and have been shown at over forty, including: Slamdance Film Festival, Palm Springs International Film Festival, Catalina International Film Festival, New York City International Film Festival, Manhattan Film Festival and New York Shorts Fest. She is a member of&nbsp;Film Fatales&nbsp;and the&nbsp;Alliance of Women Directors.Liz Hinlein is an award-winning director and cinematographer. She is the creator of&nbsp;The 20/20 Series and is the Creative Director of Filmmaking &amp; Cinematography at New York Film Academy. Over the course of her career, Hinlein has made a name for herself in a traditionally male-dominated industry as a passionate, talented filmmaker and director of photography whose work has spanned the fields of feature film, advertising, music video and VR/AR/XR.Hinlein’s debut feature film,&nbsp;Other People’s Children, earned several awards on the film festival circuit—including Best of the Fest at the Columbia Gorge International Film Festival and Best Director at the NYLA International Film Festival—and is currently available to stream on Amazon Prime and iTunes. Recently, her&nbsp;VR film for Byton Auto was nominated for Best Branded Entertainment/Commercial at the 2019 CES VR Fest and in 2018, she directed Accenture’s VR film,&nbsp;Behind the Style, winning that same award.Most recently, Hinlein spent time in China writing and directing&nbsp;The Dream Factory and she is currently in pre-production on&nbsp;OSAGE '85, a groundbreaking immersive documentary experience. Her visual expertise comes from a background of directing commercials and music videos for top brands, including Dove, Lifetime, Revlon, Gillette, Maybelline, A&amp;E, and MAC Cosmetics. Additionally, Hinlein has created films for superstar musicians such as Mary J. Blige and Britney Spears, and has been commissioned to photograph Quincy Jones, Incubus, and Fishbone.
https://network.nyfa.edu/event/the-online-20-20-series-with-content-entrepreneur-joanna-bowzer-register-now/2020/10/28/411
Wednesday, 28 October 2020
19:00 - 19:05
Add to my calendar
Online 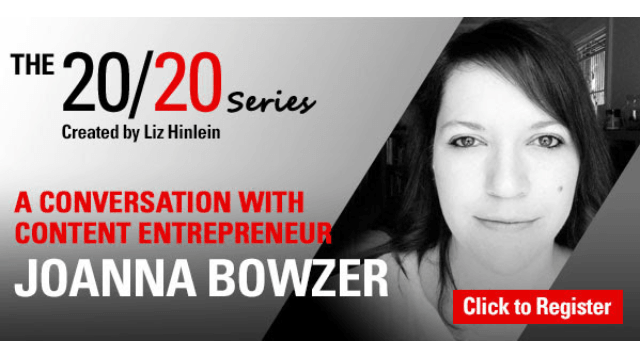